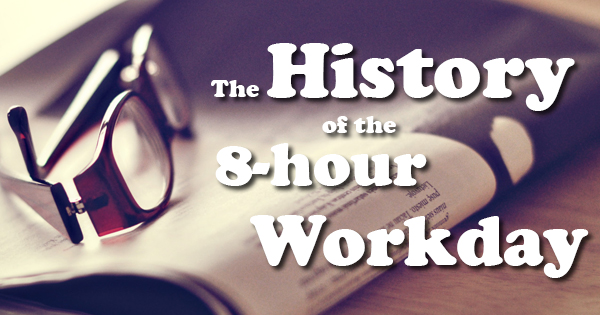 Once upon a time, civilization was largely based on a rural, agrarian society. But as the industrial revolution occurred, countless human beings migrated to cities to seek work in factories and manufacturing centers. Unfortunately, these factories were rife with human rights abuses, child labor exploitation, dangerous working conditions, and more.

Since there are plenty of lax rules across many industries today, a lot of people wrongly assume that there wasn’t much thought put into 40-hour work weeks and how much a person can work in a single day. But that’s not the case at all. The 40-hour work week didn’t become the labor standard by accident. In the late 19th century and early 20th century, the labor movement coalesced around a practical goal — the eight hour work day. That eventually evolved into the five day, 9-to-5 lifestyle we know today.

During the early 1800s, labor rights activists began organizing together to come up with new ideas and fight the human rights violations that were rampant in factories across the United States. Robert Owens, a Welsh manufacturer and labor rights activist, created the phrase that helped make the eight hour workday possible:

By 1866, the National Labor Union (now defunct) asked the U.S. Congress to pass a law that would mandate the eight hour workday. Unfortunately, their efforts failed.

Cut to the present day, and workplaces around the globe are able to track employee time punches in order to ensure people aren’t overdoing it with their work. Network Time Protocol wall clocks (NTP wall clocks) came about in 1985 and are one of the most effective time protocols in use today. Thanks to the advancement in workplace technology, the workday is able to be tracked and managed better than ever before.

From 16-hour days inside dangerous factories to NTP wall clocks in businesses with an emphasis on e-commerce, the workforce has been truly revolutionized by technology and activism.

Clearly a lot more happened from the late 1880s until today in terms of workplace hours, but you’ll have to keep reading to find out more about the history about the workday. Stay tuned for part two and contact Time Machines today to learn more about NTP wall clocks, GPS clocks, and other network clock servers.