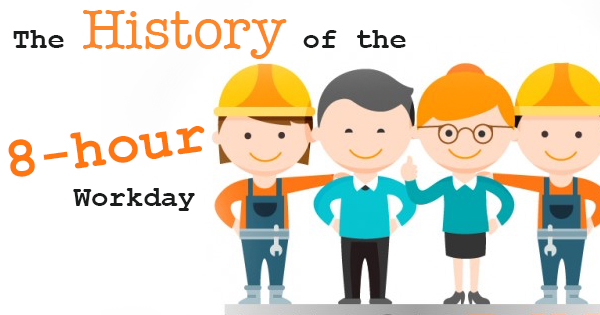 The 8-hour workday didn’t just sprout out of nowhere. Timekeepers didn’t just randomly pick eight to work across every industry in the U.S. workforce — a lot of fighting and suffering had to go into the fight for workplace (and human rights) fairness.

You already read about how the difficult conditions of the 1800s helped shape the labor fight for the next 200 years, as well as how the advent of network clocks and NTP wall clocks helped modern industries, but there is a lot more history involving the creation of the 8-hour workday.

Here is a deeper dive into the history of the U.S. workforce:

In the late 1860s, because workers were clearly struggling to maintain those long hours and tend to their families following their shifts (let alone find time to sleep), legislators passed laws to allow an 8-hour workday. Unfortunately, they passed these new labor labs with one major loophole. The loophole allowed employers to contract with their employees for longer hours, effectively incentivizing employees to work longer hours or be forced to lose out on pay.

On May 1, a day that became known as May Day, a large strike erupted across Chicago and other cities in the U.S. and Europe to fight back against this unfair and employer-favoring loophole. Once again, it was the 19th Century labor movement that saved the workday.

Thankfully, President Ulysses S. Grant issued a proclamation that guaranteed an 8-hour workday without a decrease in pay. This was quite a victory for the workforce, however, the new proclamation only applied to government workers. Even so, it was an important development in the history of the labor movement, and it put pressure on private companies to follow suit. In time, that’s exactly what happened.

Thanks to private companies like Ford Motors, General Motors, and dozens of other popular manufactures of the 1920s and 1930s, workers gained the momentum they needed to gather together and fight for better hours and fairer pay. In the decades that followed, the 8-hour, 9-to-5 workday would become standard across a variety of industries.

To keep track of the company time, large clocks were placed on the walls of offices and factories alike. Sophisticated punch card systems were put in place to allow workers and employers to track time down to the second. In the computer era, these clocks were networked with computers, giving rise to the network clocks used in modern workplaces.

In addition to network clocks, the advent of WiFi digital clocks and Global Positioning Systems (GPS) helped transform the modern workforce into what it is today. Currently, there are 31 working GPS satellites that have built-in, highly accurate atomic clocks.

It’s important that we understand the history of work as much as we understand the current and future trends. If you want to learn more about how network clocks can be used to keep your company running on time, contact Time Machines to find high quality GPS time clocks today.