TimeMachines will be closed for summer shutdown starting end of day June 25th and reopening on July 12th. Orders received during our shutdown will be processed on a first in-first out basis when we reopen. We apologize for any inconvenience this may cause.

When looking for synchronized time server solutions for a business, people everywhere have the same question: “What’s the difference between PTP time and NTP time and which is right for me?”

The answer depends on what level of time accuracy your business requires to operate smoothly. But before we get to the difference between NTP and PTP time, it’s important to understand the role of time servers in a business. 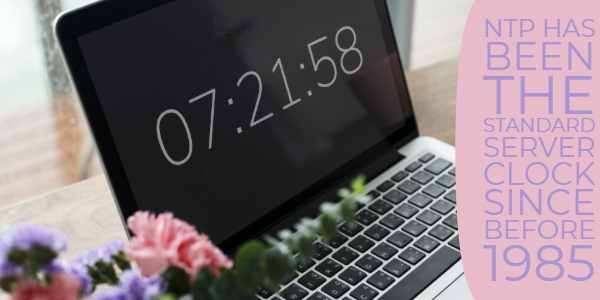 Why is a Time Server Important?

Simply put, a time server is responsible for keeping a company’s system clocks running in synchronized with themselves and with true global time. It’s vital for timestamping and client synchronization across a company’s network.

Occasionally, network engineers will assume they can get away with synchronizing the company servers with a public internet clock to maintain the correct time. After all, this is what smartphones and consumer computers do to keep time accurately.

However, while hooking up to a public internet clock is safe enough for consumer devices, connecting your business’s server to an internet clock means opening up a critical firewall port. While not necessarily dangerous, it’s similar to leaving your home’s door unlocked. Instead of taking such a security risk, smart businesses use dedicated time servers to track and synchronize their system clocks.

The Difference Between NTP and. PTP

That brings us to the question: should you use a PTP server or an NTP clock? The answer depends on what level of timekeeping accuracy your business requires.

NTP, or Network Time Protocol, has been the standard server clock since before 1985. This makes it one of the oldest time servers still in use. However, it’s slightly limited compared to PTP servers, because it only calculates time in one-second and one-millisecond fractions.

PTP, or Precision Time Protocol, was standardized by IEEE in 2002. As you would expect, its level of accuracy is up by a few notches from NTP’s accuracy. Instead of measuring time in seconds and milliseconds only, a PTP server measures times in fractions as small as microseconds and nanoseconds. PTP may even be extended to calculate picoseconds in the future.

NTP or PTP: Which is Right for You?

From here, the ultimate answer is fairly simple. If your business involves processes that require microsecond- or nanosecond-degrees of accuracy, you’ll clearly need a PTP time server. However, this is overkill for most businesses. For most, the tried-and-true NTP server is more than accurate enough.

Why Not Ditch NTP Completely?

Since PTP servers are clearly “the future” for synchronized time (or at least the current best), it’s natural to ask why we don’t all simply switch over to using PTP time servers completely. After all, just because it’s more advanced than it has to be for some applications doesn’t mean it won’t work. Why not replace NTP servers altogether?

The answer, for now at least, is because PTP servers are more difficult to implement; they’re costlier; and robustness.

NTP clients are already included in all business server systems, routers, and computers. This makes it both the simpler and the cheaper alternative to PTP servers, which require special switches to integrate. Additionally, NTP servers are currently more robust than their PTP counterparts.

You should now understand the basics of NTP and PTP time servers, as well as which will likely be a better fit for your business. For most, NTP servers will continue to be a more-than-adequate solution for synchronized time. For more information, rely on the help of Time Machines Corp today.